A good turn out appeared in the rain for Alice’s run. He’d spent all week getting lost, avoiding mischief and scouting with Throbbing Ninja and then set the trail with Screwed Up. There are some great trails around and they did a great job of finding an interesting route. Unfortunately this particular hasher did a great job of f**king it all up!

At the first circle check I found some paper and set off only to find out sometime later that I was following a run from Chilly Pussy some month or so back. Amazingly the paper was still in good shape and it wasn’t the last time I did an extensive detour. When I retraced my steps and rejoined the pack I was the last to climb up a pointless hill, only to come straight back down again – Kwazi did the sensible thing and just strolled down the trail to wait for the runners to come back down not far from where we went up.  Chuck Wao, believing I was up front, set a pace that even HRA couldn’t follow and as the checks were largely predictable he careered in ahead of the pack.  Meanwhile I spent the rest of the run overtaking. 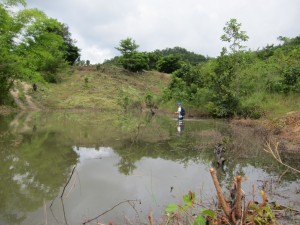 The highlight was the water crossing – thigh deep for me and tit deep for S&M girl! With no obvious detour to avoid it, the plan was surely to force Chuckie to get his feet wet – only given the rain his feet were already wet, so he played the game and trundled through it.